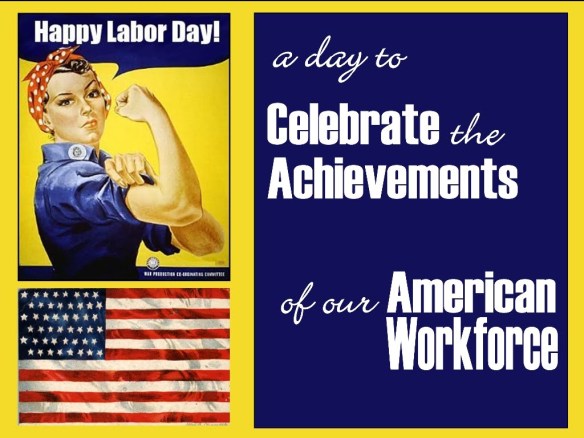 I live and work in what’s known as a “Right to Work” state, though Thom Hartmann more aptly calls it a “Right to Work for Less” state. As a result, I have never been a member of a Union. However, I recognize the importance of Unions and what they have provided all workers, Union and Non-Union alike. So let’s examine why many of us have today off work.

Labor Day is an American federal holiday observed on the first Monday in September that celebrates the economic and social contributions of workers. Oregon was the first state to make it a holiday in 1887. By the time it became a federal holiday in 1894, thirty states officially celebrated Labor Day. Following the deaths of a number of workers at the hands of the U.S. military and U.S. Marshals during the Pullman strike, the United States Congress unanimously voted to approve rush legislation that made Labor Day a national holiday; President Grover Cleveland signed it into law a mere six days after the end of the strike. The September date originally chosen by the (Central Labor Union) CLU of New York and observed by many of the nation’s trade unions for the past several years was selected rather than the more widespread International Workers’ Day because Cleveland was concerned that observance of the latter would be associated with the nascent Communist, Syndicalist and Anarchist movements that, though distinct from one another, had rallied to commemorate the Haymarket Affair (an earlier labor demonstration in Chicago that resulted in anarchists throwing dynamite at police sent to disperse the crowd and eventually resulted in May Day celebrations for workers) in International Workers’ Day. All U.S. states, the District of Columbia, and the territories have made it a statutory holiday.

Unions were and are the manifestation of workers’ rights. Let’s be honest, the most costly expense of any business operation is manpower. So logically the best way to increase the profit margin is to have slavery. However, if slavery is no longer available (Damn you Yankees!) then you find legal ways to pay the least amount with the least amount of benefits to those who must provide the most they can to take back little to subside on. Prior to (and post) the Union Movement, we had sweatshops, child labor, we had “company towns” where instead of getting paid in legal tender, you got company script to make all purchases at the company stores, unsafe and often deadly work environments. Those who merely spoke for the rights of other workers often ended up beaten and many times beaten to death. Business leaders benefited from exploiting their worker force and became extremely wealthy. Sadly, very little if any of that increased wealth ever trickled down to the workers that made it possible for them.

So as the country matured, and more and more Unions formed, workers’ rights gained an ear in Washington and State capitals. Over time, especially during the Progressive Movement and with the aid of Republican Teddy Roosevelt, laws were enacted to not only protect Unions and their workers, but all workers whether they belonged to Unions or not. The Union Movement gave us what we have today: Minimum Wage, Workplace Safety Rules, OSHA, Fair Labor Standards, Paid Sick, Vacation and Holidays, 40 hour work weeks, and the list goes on. As workers rights became codified into law, a movement began to swing the pendulum back to the direction of the corporate leaders. Workers are needed, but can be very expensive. In time, the “Right to Work” State movement came into being to nullify any positive impact of unions in the states that enacted them. Prevented public sector employees (Teachers, Police, Fire Fighters, etc) from having a stronger voice for their own kind.

And now with this recent election cycle, we are actually hearing from the Republicans, cries to repeal child labor laws, give more “rights” to business to exploit workers, reduce minimum wage standards. All things that would clearly increase the profit margins of companies and just as clearly would make the lives of workers far worse and despite the increased wealth of the corporate leaders, none of it will trickle down.

Union membership has been steadily declining, their influence waning and as a result, corporate profits for the few has been increasing. It’s no coincidence, it’s by design. Republicans and their Corporate sponsors are afraid of the workforce organizing for their own rights to get the best deal possible. Union stripping laws for public and private sector jobs (all written by ALEC) have been introduced and passed around the country by legislative action. Note that they never pass by popular vote. In fact when put to public votes, the workers come out ahead. Imagine that.

Henry Ford was a capitalist. He was also an asshole who admired what Fascists were doing in Europe. However he was also smart enough to know that if you pay your employees enough, they will come back and buy your product, thus increasing your profit margin. It’s a shame that many of these “brilliant business minds” don’t understand the concept that a cheap labor force, though good for short-term profit also destroys the middle-class work force and ultimately puts them out of business since no one has the money to buy what they produce. What’s the saying, penny wise-pound foolish.

Enjoy Labor Day today and even if you are not a member of a Union, be thankful to them for doing the hard work, even getting beaten up and killed for many of the rights you enjoy today as a worker. Support them because in doing so, you support yourself and the economic well-being of the nation as a whole, including the 1%. They’re just too greedy and pound foolish to recognize it.