This rant is essentially an open blog post for Ben Carson, though I doubt he’ll ever read it. However, it also applies to anyone now or in the future who plans to run for president of these United States. This process is not for those with thin skins, easily bruised egos, or the faint of heart. From our founding, the vetting process for what is arguably the most powerful office in the world, chief executive of the richest, most powerful nation in the history of man has always been a test of character.

Even at our founding there was a press who, depending on where they stood, would vilify candidates for the office. Even George Washington was vilified in the press. John Adams was so vilified by the press signed the Sedition Act making it a crime to publish anything malicious about the government or it’s officials. 10 citizens were prosecuted.

In the years that followed, candidates were vetted and vilified by the press continuously. No candidate nor a candidate’s family were ever immune. No matter what they stood and advocated for, there were those vehemently opposed to them and they took to the press. They examined all facts, scandals, innuendos, anything to disgrace the candidate. This has happened with every election cycle since the first. So Ben, what you are experiencing is nothing new.

As much as a President is loved, they are also vilified. That is the nature of the position you seek. It’s not just people peeking into your past looking for dirt, there are and always will be people out there wanting to kill you. It’s a foreign and domestic threat that faces each and every President. If you can’t handle the press, how will you handle the assassination plot that is inevitable? By the way, our current president and his family have received more death threats than any other president in history. Look how he copes with it. Can you or anyone else do any better?

No Ben, Donald, Jeb, Chris, Ted, Rand, Mike, Rick, Carly, John, Lindsey, Bobby, Marco, George, Martin, Bernie or Hillary, none of you are immune from the scrutiny of the press and social media nor should you be. This is part of the process. It’s easy to say other candidates get it or got it easier than you, but frankly that isn’t true. For as much is out there, there will be an equal amount of scrutiny, both fair and unfair to contend with.

The press is your first test of character for being president. If you can’t handle the press, you’ll never be able to handle what follows.

If you’re serious about being president, suck it up and take it. Otherwise drop out now because the longer you’re in, the worse it gets. Ask the current and past living presidents. They have all gone through this too.

Recently America was given a glimpse of the home of Dr. Ben Carson, current GOP front runner for the Iowa Caucus who’s gaining on Donald Trump. Many commented on the rather unique artifacts strewn about the home as an homage to the good doctor. The one painting receiving much attention was this one of him and Jesus together.

However, that wasn’t all. It turns out Dr. Carson has an hidden gallery of paintings he has yet to reveal to the public, until now.

For your artistic curiosity and intellectual discussion, the hidden gallery of Dr. Ben Carson: 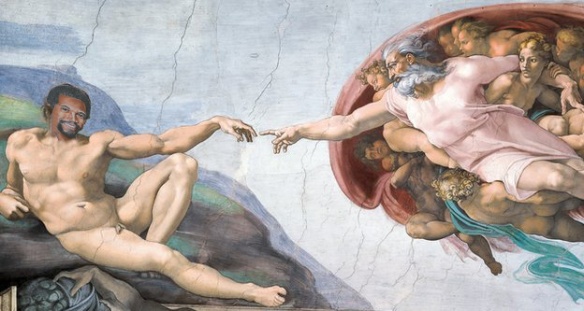