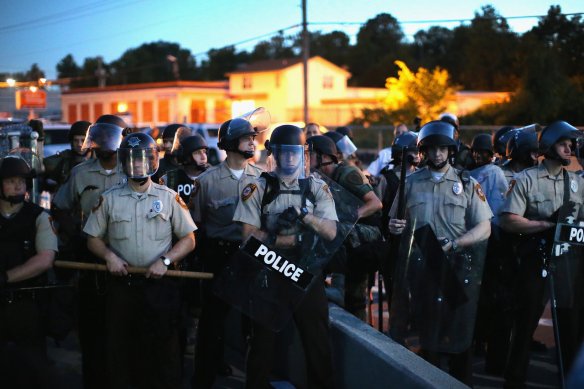 Ferguson, Missouri: according to the 2010 census:

The mayor is White.

Six City Council Members of whom 5 are white and only 1 is African American.

Ferguson is a suburb of St Louis, the 6th most segregated city in the nation.

Is it any wonder that with such low voter turnout, you end up with city government and city employees who don’t look like the city they’re suppose to serve.

As new reports in recent days have shown, there is a long history of distrust in the African American Community of Ferguson’s police department. The shooting of Michael Brown is seen as the latest episode of a generational problem for the town. The Police response to protests has been over the top, making the community look like an occupied military zone.

As of this writing; despite Missouri law, the name of the officer who shot Michael Brown has not been released. Officials are citing concern for him and his family’s safety. UPDATE: Darren Wilson has been identified as the officer involved in the shooting. To date he has yet to make a formal statement to the press nor has it been confirmed or denied he made a statement to his chain of command immediately after the shooting as required by most law enforcement agencies. Wilson is on paid administrative leave in an undisclosed location.

In press conferences, despite on-scene witness testimony describing the shooting and acknowledgment that Michael Brown was unarmed and was merely walking down the middle of the street when confronted by the officer, he is still referred to as a “suspect” by both Ferguson and St Louis Police.

It took the Governor of Missouri stepping in to appoint an African American Captain of the State’s Highway Patrol to calm the city down. This act was ridiculed by St. Louis Prosecutor Bob McCulloch (who beat his African American Opponent in the Democratic Primary) as an overreach of power and uncalled for. McCulloch has yet to indicate if and when he will file any charges against the police officer for whom there is overwhelming probable cause has committed a serious crime, possibly murder.

Beyond the poor community relations between City Officials and her people, despite the racial tensions that exist, despite the gross uncalled for show of strength, power and intimidation of local and St. Louis Police to townspeople and media, the issues of Ferguson go far beyond the township. It’s endemic to what this entire nation faces in this election year, lack of voter turnout that results in government that isn’t representative of its constituency and isn’t accountable to them.

Ferguson may be an extreme example, but it’s an example of what is true in this entire country, especially during “off year elections.”

Not enough people voting, resulting in the wrong people winning and governing only to the interests of the minority of people who voted for them and/or the money interests who paid for their campaigns.

In this country the one thing every American has if they are of voting age, is the right to vote. In midterms, less than 40% of eligible voters nationwide even take the time to vote. This results in unrepresentative government that is unresponsive to the majority of people they are to serve.

The only solution is for everyone to simply vote their interests.

Get the word out, for better government services to include police and first responders, register and vote for those officials responsible for hiring, training and holding accountable the government servants who are paid for by your tax dollars.

“To Protect and Serve” should be more than a motto on a police cruiser’s door; it should be a calling for men and women to serve all of the people in the community they serve. Equal Justice Under Law.

MSNBC: Ferguson Lack of Diversity Goes Way Beyond Its Cops:

Slate: Ferguson is Mostly Black, Why is its Government so White?

VOX: Why There Wasn’t Accountability for the Police in Ferguson