The convention is over and listening to these people, including the two headliners, Mitt Romney and Paul Ryan, I’m left with the thought that is the title of this rant. We are still recovering from the worst economic calamity we’ve faced since the Great Depression. But how did we get here? Who lit the fire?

It began over thirty years ago with Ronald Reagan and Reaganomics. The economic theory that his own vice president, George Bush Sr. called “voodoo economics.”

After the Great Depression and World War II ended, as the only industrialized nation left unscathed by war, and with the banking regulations and social programs enacted by FDR and later by Truman (like the GI Bill), we built the strongest middle-class in history, even with a 95% tax rate for the 1% of the time (and that was under Republican Dwight Eisenhower). Our economy boomed and didn’t bubble at all thanks to the regulations. Thanks to Social Security the elderly didn’t slip into poverty at the rate they did prior to FDR. We had school lunch programs implemented that fed our children and made the population healthier because they were fed.

Eisenhower used government and tax revenue to build the Interstate Highway System that resulted in more infrastructure enhancements and an ever-growing economic base. Yes you built that via your tax dollars to the Federal System and both Democratic and Republican representatives worked to serve you by improving the nation. The power grid, education system, hospitals, the Veterans Administration, a lot of government spending, with sufficient tax revenues coming in to fund it. And yet, nobody was ever taxed into poverty, people actually got richer as the middle-class grew.

But then came Reagan. He thought that by slashing the tax revenues from those who were already so wealthy, the taxes they paid had zero impact on their ever growing standard of living, and eliminating the banking regulations that kept another bubble economy from forming, let alone a depression, things would improve for all. Make the rich richer and it would trickle down. Well, our deficits and national debt began to grow exponentially. And with the first Bush, we had our first major recession as a result and that resulted in Clinton becoming president.

Clinton, without any votes from the Republicans increased the taxes on the rich, and even though the GOP said it would destroy the economy, it didn’t. Not only was the budget balanced (something Reagan never achieved) we ended up with a surplus. But Clinton also did something very Reaganesque and destructive. He eliminated the last vestige of New Deal regulations of banking by signing the GOP repeal of Glass Steagel. 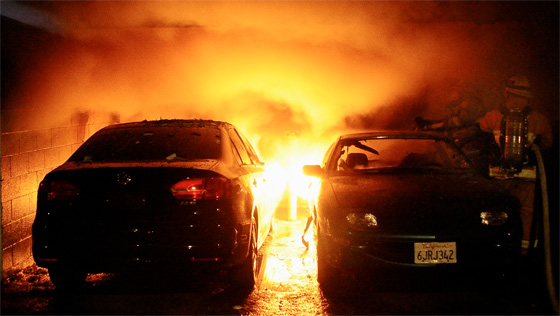 When he left office and Bush Jr took over, we had another bubble that impacted the economy and Bush followed Reagan’s lead and imposed the largest tax cuts for the wealthy in history, while at the same time increasing government spending to fight two wars. With the repeal of Glass Steagel, investment banks and regular banks started playing with each other money and then it happened. Due to all the deregulation of the banks and the new “derivative markets” the world economy crashed. It was in a full tail spin when President Obama took office. The GOP Arsonists with some help from Bill Clinton had lit the fire and the country was burning. It was a 5-Alarmer and Obama had his hands full trying to put it out.

He was able to build a fire break via the stimulus that everybody who’s looked at it has credited for avoiding another Great Depression. But it wasn’t enough. The stimulus was too small to effectively stop the still burning fire, it merely slowed it down.

The reason being, the Arsonists were still there in Congress. These little peckers were sabotaging all attempts to stop the fire and begin rebuilding the damage. On the day Obama took office, many of these arsonists met to plot strategy to make sure the fire continued to burn. They had a plan, they wanted things to get worse so they could blame the fire chief for the arson and take blame off their shoulders for starting the fire.

It would be bad enough if Fire Chief Obama only had one or two arsonist to contend with, but he is dealing with a gang of arsonists. Mitch McConnell, John Boehner, Frank Luntz, Grover Norquist, Eric Cantor, and the young gun, Paul Ryan. These guys plotted to prevent allowing Obama the equipment and funding needed to put the fire out completely while they plotted new fires. Through filibusters in the Senate and wasted legislation in the House that focused on everything except putting out the fire and rebuilding, the economy is stalled.

Now we are at the end of the RNC Convention and the new arsonist gang leader Mitt Romney, with the help of little arson boy Paul Ryan are telling their victims that the fire chief is responsible for the fire and all the delays in getting work crews out, insurance claims paid to repair the damage and rebuild.

What’s worse, they say this while holding gasoline cans and matches called the Ryan Budget that they plan on using to start the blaze all over again. They want to remove the fire hoses in place to fight more fires known as Dodd Frank.

These guys are felons, arsonists and sociopathic liars. Anyone fool enough to support these arsonists deserve to lose what little they have. Problem is that with an arson fire, it spreads to those who tend to be very careful and takes them down too.

November is coming, do we vote to stop the fire, lock the arsonists out of Washington and begin repairing and rebuilding the nation or do we let the country burn to the ground. Fire Chief Obama needs your help. Only you can prevent GOP Arson Fires.