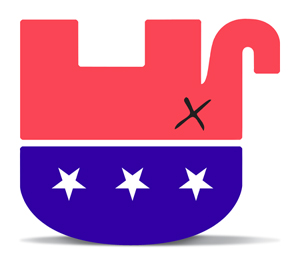 As a former Republican and a helper, I’m going to do something on this post that you wouldn’t expect from me if you’ve read my tweets on Twitter. I’m going to explain to the Republican Party what they need to do to avoid the fate of the dinosaurs in 2016. Now this advice doesn’t come free and is not without pain, it involves actually stepping outside their “bubbles” and facing reality and fact (which actually do have a liberal bias). They also have to accept there is nothing wrong with a liberal bias.

First a little about myself that some of you may already know about. I’m a fourth generation Arizonan. When I turned 18 in 1979, I registered as a Republican. I was a member of the Young Republicans while a student at Arizona State University. I met Barry Goldwater and heard him speak. I saw myself as a fiscal conservative and a believer that government should only be big enough to assist the people in those things that neither they nor the private sector could provide. At the same time, I was a social liberal. It’s actually was a perfectly reasonable combination for Republicans at that time. Government shouldn’t involve themselves in the personal lives of individual Americans. As the conservative movement took hold of the Republican party, Goldwater warned them to be careful not to get in bed with the extreme right-wing, religious moral “conservatives” (who he doubt were truly conservative) saying that they would be the death of the party.

Goldwater on Falwell and Moral Majority:

“I’m probably the most conservative member of Congress and I don’t like to be kicked around by people who call themselves conservatives on a non-conservative matter.” Barry M. Goldwater

It started with the Religious Right’s take-over of the party, followed by more corporate influence and finally the complete take-over of the GOP by the Koch Brothers sponsored and paid for Tea Party Movement that caused me to finish evolving. I ended up leaving the Republican Party; but my core beliefs never changed, they only became more refined.

As the election results were coming in on Tuesday night, Bill O’Reilly opined what was happening with the “American Establishment becoming a minority” to explain why Obama could win:

Now Bill’s explanation wasn’t quite factual, but he came close. He was wrong that 20 years ago President Obama couldn’t beat an “establishment” Republican Candidate. He forgets that 20 years ago was 1992, when Bill Clinton, a centrist Democrat similar to Barack Obama today, ran against establishment GOP Candidate George H. W. Bush. Further, it’s not a matter that the “establishment” is becoming a minority, it’s a matter that the American people are evolving and what the Republican Party offers isn’t what the majority want or expect. Although the GOP remain in their bubble, and many of the rank and file remain in that same bubble, Americans are actually noticing that there is a real world outside of that bubble. The country is changing, it’s evolving. To focus only on what they THINK old white people want (a dying constituency by the way) and ignoring everybody else, is a recipe for extinction.

Because Mitt Romney, Reince Priebus, Karl Rove, et al, wouldn’t venture outside of their bubble (possibly out of fear as David Frum says), they did nothing to counter the bad messaging from Sean Hannity, Rush Limbaugh, and various Governors and Republican Legislators sponsored by the Koch Brothers and ALEC, when they went after Women, Latinos, LGBTs, Blacks, anyone outside of their bubble. They refused to acknowledge that all of these people are an ever growing and powerful demographic, who are taking control of the political narrative in this nation. Their numbers are increasing and their views are unlikely to change because “establishment” Republicans tell them that they are wrong. They wouldn’t work with them or acknowledge their beliefs. So where else were they to go. The exit polling bears this out.

And of course the big elephant in the room maintaining the GOP bubble and destroying the Republican Party, Fox News:

Now those in the Republican bubble are not allowed to accept science, they cannot accept Climate Change and certainly cannot accept evolution. However, both do exist and the lessons of both apply to the Republican Party. The political environment of this nation, as well as the climatic environment is changing. The change to some extent can be altered, but not stopped. Too many factors beyond anyone’s control is involved. If an organism cannot adapt to the change in their environment, that organism dies off.

The Republican Party to date refused to adapt to the changing political environment of the nation. They can try to stop the change, but have been unsuccessful.

Voter suppression failed, it only made people more determined to vote.

Millions spent by the SuperPacs in propaganda and lies failed because people were able to find the truth for themselves and questioned the source of the ads.

The change is here; however, the GOP isn’t adapting and they are dying.

Today, Speaker Boehner and Mitch McConnell have implied they will stand firm with no tax increases for the wealthiest of Americans. They ignore that the majority of Americans, including a majority of Republicans agree that those making over $250,000.00 a year should pay more in taxes, which is what President Obama want. Though some of them are now saying that they are “evolving” regarding immigration and women’s rights, they stand firm on the same rhetoric from the extreme fringe right that rising taxes is a non starter. It’s the same rhetoric spoken in 1993 with Bill Clinton imposed a tax hike on the wealthiest. Not a single Republican voted for it saying it would destroy the economy. Instead, we had the greatest and longest peace time expansion of the economy in history.

They hide their own studies that prove that tax cuts to the wealthy do nothing to improve the economy.

They hold on to the same “bubble” talking points of “job creators” despite 30 years of evidence against them.

They won’t budge, they won’t adapt, they are willing to go over the fiscal cliff and raise taxes on all Americans and impose sequestration that would have massive cuts in domestic and military spending because they won’t adapt.

The majority of the American people see this. This is why, if they don’t begin to adapt, begin to negotiate, begin to compromise, begin to get out of the fringe Koch paid for and FOX orchestrated bubble, the party will suffer another major loss in 2014 and will cease to exist in 2016. The GOP will go the way of the Whigs.

It’s simple, adapt or die. The choice is theirs.

President Obama Discusses the Fiscal Cliff and Reaches out to GOP: