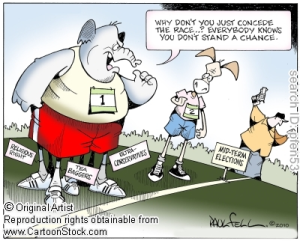 I know most of you understand this little bit of linear time, but many in mainstream media and political pundits are spending their time talking about the race for 2016 starting now as if 2014 isn’t going to happen. Well as I posted after the President’s win, the work continues and we need to focus on 2014 to avoid another 2010 that left us all in a deeper mess that the President has had to contend with.

The President won in an electoral landslide and had a 51% majority of the popular vote to Mitt Romney’s 47% (Karma is a bitch Mitt). Further, the Democratic control of the Senate expanded when mainstream media had been predicted for the past two years, would most likely go to Republican control. Although the House remains in Republican hands, their control has been decreased and many suspect that were it not for the district gerrymandering that took place after the 2010 race, the Democrats would have taken control of the House. In fact, Democrats running for the House garnered far more votes than Republicans. Many of the key Tea Party candidates (Allen West, Joe Walsh, etc) lost their seats.

Now you would think the country and Republican Party have woken up and all would be working to actually start legislating for the majority of the American people. You would be wrong. Subtle signs are already beginning to manifest showing that things could go bad if we don’t stay focused and ensure there is no loss of power and influence in both the House and Senate in 2014.

Now after the high voter turnout in 2008 that gave us a President Obama and large majorities in both the Senate and House, people on the left began to complain that Obama and the Democrats weren’t “liberal” enough. They were upset that he didn’t provide “single-payer universal healthcare”, upset that he continued many of the same policies regarding national security as the previous Bush administration, upset that he agreed to extend the Bush tax cuts for all Americans to include the 1%.

Mainstream media, including those on MSNBC picked up on that problem and started to complain that Obama wasn’t doing what he should. They went so far as to say that during the 2010 race, people should register their complaints at the polls. Ed Schultz, Rachel Maddow, and Keith Olbermann in their commentary expressed their dissatisfaction with the Obama administration. At the same time, the Republicans and their financial backers placed resources into the fledgling “Tea Party” movement. They were out in force at town hall meeting expressing their opposition to “ObamaCare” and government takeover of healthcare. Then came the 2010 election. The extreme right wing came out in force while the disenchanted left wing stayed home.

The Republicans swept the House seats and took over many governorships and created many “super-majorities” in State legislatures. The Republican Tea Party took enough control of the country to begin pushing anti-choice, anti-union, and pro-business and 1% legislation, while blocking all efforts of the Obama administration to push job bills to help the country. They went to war with Obama by attacking many of the American people (women, minorities, LGBTs, non-Republicans) by making their lives miserable in hopes of making them so angry; they would take it out on Obama and the Democrats in 2012.

In short, they were working the Mitch McConnell primary legislative agenda to make Obama a one term president. They started redistricting congressional districts to make the GOP House State Legislature seats safe; they started enacting voter suppression laws to keep as many from the polls as they could. They fully understand that their influence in elections does better when fewer people vote than if many showed up.

Well in 2012 they were unsuccessful. Voter suppression turned into anger at the polls and the people knew who to be angry with. Despite the predictions of mainstream media, the youth turned out, the LGBT community turned out, minorities turned out. The numbers did what the Republicans hate in a national election, they grew. It’s a fact; the party that represents more people will do better if more people show up. A party that only caters to a few at the exclusion of the many will do better if no one shows up. As Paul Weyrich who founded ALEC famously said at a Republican Party event:

So here we are. The first issue to be contended with is the so-called “fiscal cliff” that if the lame-duck congress doesn’t address before December 31, the Bush tax cuts disappear for all and sequestration of both military and domestic spending will go into effect. Taxes go up for all, spending goes down, and it is likely that if not corrected by the new Congress, the country can slip into another recession. The GOP understand that their party is being held responsible right now and are grudgingly agreeing that maybe, just maybe, the upper 2% should go back to the Clinton Tax rates while the other 98% remain under the Bush tax cuts and Obama payroll tax cuts. Maybe, just maybe military spending should be cut to reduce deficit spending. The Democrats are saying they would hold firm that Medicare, Medicaid and Social Security are off the table. We’ll see.

Many on the right are being marginalized today, Karl Rove, Grover Norquist, are being ridiculed in Republican corners. So you would think that they have learned their lesson. You would think that they would begin to discredit the Tea Party influence. You would think they would be willing to work with the President and Democrats for all the people. The rhetoric from Bobby Jindal, Marco Rubio, Chris Christie, would give you hope for the future. Well, don’t be so sure. There are other things going on that shows that they haven’t changed and most likely won’t change. In fact, if given the opportunity, they will go back to what was happening in the past two years hoping for a repeat in 2014 from what happened in 2010 to secure their holdings in Washington and prepare to take complete control in 2016 and eliminate everything the President and Democrats have worked to get all of you.

In Ohio, Governor Kasich and the Republicans in the legislature have introduced a new round of misogynistic laws taking free choice away from women.

In preparation for the 2014 elections, the Republican Senate has named Senator-Elect Ted Cruz to the National Senatorial Campaign Committee. Ted Cruz is a Tea Party advocate who is on record supporting and recruiting Tea Party candidates in the past. Expect more Sharon Angels, Christine O’Donnells, Todd Akins, and Richard Mourdocks, to be running in 2014 on Tea Party agenda.

They are continuing their rhetoric that all things sciency is fraudulent or from the pit of hell.

They still say the unions are responsible for companies going bankrupt even after tripling the salaries and benefits of their CEO’s and top executives while being financially strapped.

They continue to focus on Benghazi and “word smithing” by Obama spokespeople while divulging the names of Libyan operatives aiding the United States in our attempts to apprehend the perpetrators of the attack and not appearing all that interested in bringing anyone to justice for the attack, only Susan Rice for not saying it was a terrorist attack when reading the declassified talking points from the CIA.

Paul Ryan was chosen by John Boehner to negotiate the fiscal cliff talks even though he thinks the Republicans got a mandate for his budget ideas in 2012.

Governors in red states are refusing to accept federal funding for expansion of Medicaid to insure more people in their states under ObamaCare and also are refusing to establish state exchanges for insurance for those wanting to buy it at a discount per ObamaCare.

2012 wounded the Tea Party Republicans, it didn’t kill them. They are counting on a much need blood transfusion in 2014 to begin the attacks anew. We cannot allow this to happen. Twitter is already beginning to fill with emo-progs saying that if Obama doesn’t do this or that they won’t have anything to do with the Democrats again. Social media is already begun to read like it did before 2010. People need to constantly be reminded of some key facts:

Obama is a centrist, in many ways he’s always been more of a moderate Republican than Liberal Democrat and by being so, has been very effective.

The only alternative to Obama and the Democrats the Republicans are willing to provide the voters are extreme right-winger who do and vote only as they are told by the 1% financial backers. Social programs will be cut, taxes for rich will be cut, military spending will go up and middle and working class will suffer under Republican control. Certainly more so than under Obama and the current Democratic representation.

GOP have sponsored a law suit to be heard in the Supreme Court to overturn the voting rights act of the 1960’s.

Voter caging and suppression acts continue to be pushed and will be in full force by 2014 to keep many from the polls. If the laws cannot be overturned or ruled, then you must start now to get your IDs and get registered to vote.

If you don’t vote, those on the far extreme right will be the only ones voting as they did in 2010 and will be voting for an extreme right-wing agenda that will impact your states and nation as a whole.

GOP obstruction is likely to continue over the next two years. Everyone who has been active these past two years must remain as active, if not more during the next two to hold you local legislators and Congress accountable to the people, not the 1%. You cannot let up at all. Whatever happens in the next two years will impact the nation for generations to come.

It’s not just the Supreme Court, its ending 30 years of supply-side “Reaganomics” and going back to building a strong middle-class as we had before. 2014 is prologue to what we can expect in 2016. So let’s focus on 2014 first so we can have a better 2016.

It’s very simple, stay active, register, get ID and Vote like we did in 2012. Your country’s future depends on you.