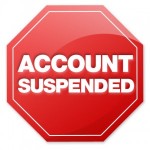 I was surprised Monday morning when suddenly I found for the first time in the 3 years I have been on Twitter, I couldn’t access my account. I later came to learn that I had been suspended. I had to go home and retrieve my password to access the site only to discover that I had been suspended due to “complaints” that I was sending “unsolicited replies” (which sounds oxymoronic) with a nasty tone to them. They said this made for a bad atmosphere on Twitter and I had to promise to be nice, otherwise I would be permanently banned from the site.

I later came to learn that I was not alone that morning. Several of my Twitter friends were also suspended. I then learned that trolls gang up on our accounts; send in faux complaints about our content to get us suspended. Made sense because in the days prior to this I broke my long-standing rule of not engaging with trolls and right-wing nut jobs when they enter my time-line opting instead to simply block them. However with the tone of things coming down in response to the Sandy Hook shooting and the crap coming from the mouths of the pro assault weapon and high-capacity magazine group, I couldn’t let many of them go unchallenged. Of course there could also have been some complaints because in recent months I’ve learned to send my snark directly to the Twitter accounts of our nation’s leading idiots. Perhaps that’s what they mean by “unsolicited replies”. I’ve been especially active in sending tweets to Governor Rick Snyder @onetoughnerd and @RepLouieGohmert. I’ve also sent tweets of a particularly snarky tone to @ChuckGrassley, @SpeakerBoehner, Mitch McConnell @McConnellPress, Eric Cantor @GOPLeader, @Limbaugh, @SarahPalinUSA, @SenJohnMcCain, Sen Lindsey Graham @GrahamBlog, and @MicheleBachmann, you know, the usual suspects.

Although these are public servants, perhaps they’re too thin-skinned to be challenged via Twitter on their actions and instead of blocking, ignoring or manning up and responding, they go to Twitter to silence those who don’t agree.

Fair enough. I can understand not wanting to deal with people who don’t agree with you and trying to stop it. However I would think public officials would have more backbone. So be it.

Since then, because maybe I can’t trust myself to be good or because the problem may be trolls ganging up on those of my point of view I’ve done two things. First of all I’ve stopped responding to trolls and RWNJs again. When I get a mention I’ll check the bio and Time Line and if they’re stupid and insulting, they’re blocked without a response. Second, I’ve created a “Bunker” account on Twitter that I can go to if I end up in Twitter Jail or get suspended again.

So if you can’t find me on Twitter for some reason, you can find me in my bunker where my Twitter rants will continue. Afterall, the first amendment comes before the second amendment.

Here’s a post from Crook’s and Liars over this very same issue. We’re not alone and Twitter monitors appear to be as gullible as those on the right in suspending those who really aren’t doing anything wrong based on thin-skin accusations of those who get their panties in a twist because people don’t agree with their narrative.