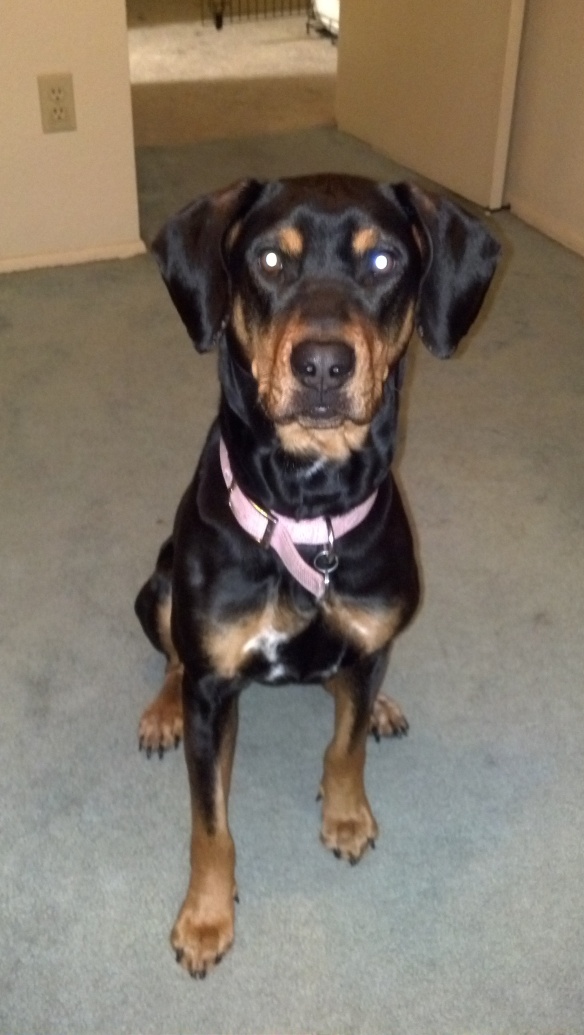 This is a departure from my usual subject matter, but this being my blog and my rules, please indulge me.

A little over two years ago, we brought home a rescue puppy. She was about two months old and was found wandering the streets of West Phoenix. She suffered from some bladder infection, had some abrasions to her fur, but was lively and lovable. We were not quite sure of her breed. Obviously some Rottweiler in her, but also some Hound, Dachshund, and a few other breeds. Our three-year Border Collie Zoe tolerated her as she kept licking and trying to play with her. We named her Cloe.

Cloe was unique from any other dog we have ever taken home. Though difficult to house train, she eventually learned the routine. She never showed any fear, was sure of herself at all times, and always wanted to cuddle with any human being she came in contact with. Her disorders were quickly cleared up by our vet and she grew to be about 45 pounds though the size of her paws would indicate she could have been easily another 30 pounds on top of that.

She loved to walk on the back of the couch like a cat, loved to gaze in your eyes with an intense stare before licking your face with her spotted tongue. She played rough, loved to growl while playing with you but would immediately stop with the simple command, “kisses” where she would stop and lick your face. She hated having her nails clipped. Fought that at every turn. But other than that she brought a sparkle into the lives of me, my wife and Zoe. 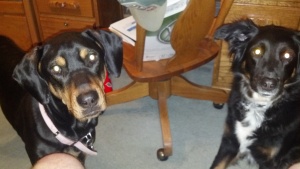 Five months ago in the middle of the night Cloe went into her first seizure. She slept on the bed with us and the sound startled me. Not being quite awake and aware of what to do, as I saw her apparently ready to choke on her tongue and stuck my hand in there only to have her bite off the end of my ring finger. She tore out the nail base, lacerated the end, and broke the bone. After my trip to the emergency room we took her to the vet and they did all the tests. They could find nothing wrong and we decided that as long as she didn’t have too many seizures, she would be fine.

Over the next several months she would average about one seizure every other week. They would last about 3 minutes; she would be stunned, but would quickly get back into her regular routine. She remained active, loving and attentive to our needs as we were to hers.

Four weeks ago she after a vet visit where she was found to be in good health, she had four seizures in one hour. We called the vet and Cloe was prescribed Phenobarbital. We started to give her the medication and everything was fine for three weeks.

Last week at around midnight on Tuesday she went into another seizure. The first one we had noticed in three weeks. She calmed down and we went back to sleep. An hour later she had another, then another having a seizure every hour. These were more severe and lasted longer than any previous episodes. We took her to the vet and they sedated her and kept her for observations. It was determined that the Phenobarbital was in a proper dosage so it was decided to also place her on Potassium Bromide in addition to the Phenobarbital. We were also given valium suppositories in case of any future severe seizure. At 5:30 that day, I was told I could take her home. She was recovered and was back to wagging her tail. When I picked her up though, she didn’t seem quite the same. We got home, we gave her the medication and one half hour later she went back into a seizure followed by another one 10 minutes later. We gave her the valium but it didn’t help. She ended up having 4 seizures in an hour so I took her to an emergency animal clinic. This dog who loved to get in the car for rides was literally screaming and was showing fear she never showed before.

At the clinic they took her back and stabilized her. We were there for five hours and they advised that she was calm and could go home or stay there for observations, whatever I decided. Either way it was advised she be taken back to the vet the next day. I decided to take her home. Just before leaving, she had another seizure. I knew this wasn’t going to get better. I did take her home where she had seizures all through the night and into the morning despite the valium she was given. The sparkle of her life was gone. She did not recognize where she was and was scared. I had been up for 36 hours at this time.

We took her to the vet and she was examined. She was suffering from intractable seizure disorder. Though they were sure they could sedate her, it was also certain than the sedation would take all of what this dog was away. Further, the underlining cause of the seizure would still need to be determined. It was possibly a brain tumor, meningitis, valley fever in the brain, they couldn’t tell. But each possibility meant our dog was gone and we would only be prolonging her life of misery.

We had her put down. A dog perfectly normal, active, and loving only 48 hours before had a terrible 36 hours of utter misery that left her scared and confused.

Many don’t understand why pet owners are so involved with the lives of their pets. Well, they’re family and like they say, they give unconditional love. We will miss Cloe who at not quite three years of age, is gone but will always be in our hearts. If you have a pet, enjoy all the time with them as you can. 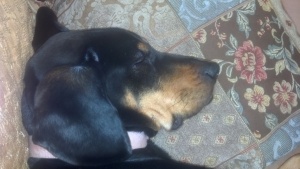