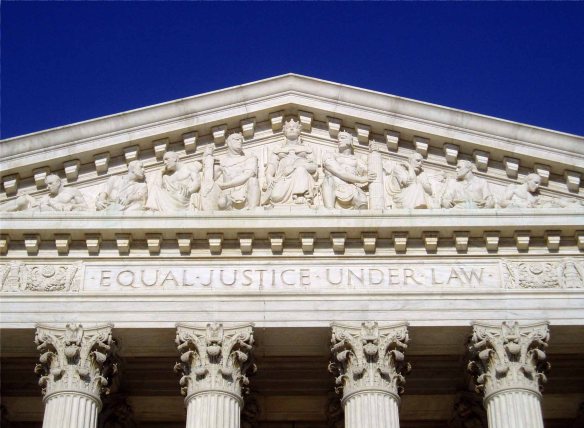 The Founders were the intellectual elites of their time, they were also the most creative and thoughtful people of their time. They created and enacted the Constitution in 1789 to correct the numerous errors contained in the failed Articles of Confederation and Perpetual Union. They created the Executive Branch, the Congress as we know it today, and The Supreme Court in order to have three co-equal branches of government. Though each branch would have specific duties and responsibilities, the other branches would have various abilities for checks and balances on the other two. However, I don’t think they placed enough thought in the creation and duties of the Supreme Court.

Article III, Section 1 created the Supreme Court and other “inferior” courts where the Justices who serve in them “shall hold their office during good behavior.” Section 2 gave the Supreme Court authority to hear cases for matters that fall under the provisions of the Constitution, as well as deal with legal issues between the states or citizens of the states regarding other states or their citizens. Section 3 discusses “treason.” Problem is, the founders were too general in exactly what the Supreme Court and other inferior courts would do how they would do it and what their limits would be. Time and additional congressional acts and case law would determine those things.

Though not specifically spelled out in Article III, has been interpreted to say that Justices of the Supreme Court and inferior Courts, upon confirmation will for life unless they resign. Only way prescribed to remove a Justice is trial in the Senate upon Articles of Impeachment being drawn up in the House of Representatives. This has only happened once and the Supreme Court Justice was acquitted in the Senate.

In Marbury v Madison, the Supreme Court gave itself the authority of Judicial Review of the Constitution and determining what was or wasn’t constitutional. This case would be the foundation for the Supreme Court being able to overturn any legislative act from Congress, signed by the Executive Branch, on grounds of whether it was constitutional, even though the other two branches of government support the law. This wasn’t spelled out in Article III, but the authority exists today. Though sparingly used in the early years of this country, over time the Supreme Court more and more made its interpretation of the Constitution on matters presented to them and made her rulings. Often they would overturn their own ruling based on re-interpretation of the constitution and “intent” of the founders. This has been the history of the Court.

This brings me to the 21st Century and the current state of the Supreme Court. Over time the Court has become more of a political institution than a legal one. It was only natural. A president using a political litmus test nominates a Justice, the Senate determines if the nominee is “safe” and confirms and the Justice sits on the Court for life. If they have a political agenda of their own, there really isn’t anybody to stop them other than the associate Justices ruling the opposite way.

Let’s look at the two major rulings this week. In the matter regarding the Shelby v Holder (the Voting Rights Act), Justices Roberts, Alito, Scalia, Thomas and Kennedy cited essentially that under the “State’s Rights” provision of the Constitution and the fact that despite evidence presented in arguments and overwhelming support of the Act in 2006 by the House, Senate and Republican President, since they do not believe racism is any longer an issue in this country, the formula used in Section 4 is outdated and unnecessary.  They ruled that individual states covered under Section 4, using State’s right, can draw up their own districts and voter registration criteria without prior approval of the Justice Department. Within two-hours of the ruling, Texas immediately stated it would impose redistricting and voter ID laws already shown to be discriminatory against voters based on race that was overruled in 2011. States rights ruled supreme with these Supremes. However, the remaining four Justices cited strong opposition to the majority opinion.

In the DOMA (Defense of Marriage Act) case, Justices Kennedy, Kagan, Sotomayer, Ginsberg, and Breyer cited the “State’s Rights” provision of the Constitution and evidence presented in arguments for their ruling and despite the fact that a majority of the Senate, House and a Democratic President signed it, State rights ruled supreme because individual states, using State rights can determine what a marriage is and the Feds have no authority to deny marriage status on a national basis that overturns the States’ decisions. The remaining four Justices cited strong opposition to the majority opinion.

All nine Justices read the same Constitution, all nine heard the same evidence and same arguments pro and against, all nine read the same applicable laws, yet we had a 5-4 decision in both. Only Justice Kennedy cited “State’s Rights” for both opinions. Regardless of where you stand on these two issues, how can you not see that politics and political leanings had more to do with the rulings that the constitution and laws of this land?

The most egregious example of the politics of the Supreme Court impacting the nation in a way that there is no recourse was Bush v Gore.

The ruling in this case actually went against State’s rights by stopping the State of Florida from counting all the ballots to determine which Electoral College votes would go to whom. The constitution clearly provides that the State determines their electoral college and sends them to vote for the President. It’s very clear and the Florida Supreme Court ruled that all the ballots had to be counted until the US Supreme Court overruled them. To add insult to injury, the Court took the additional step to say their ruling would only apply to this case, not any future case. How was this not political?

This was the Supreme Court determining who was to be the President of the United States. It’s the Chief Executive and Senate who are to determine who sits on the Supreme Court. Nowhere in the Constitution does it say the Supreme Court can decide who sits in the White House. There remains debating stories on who would have won had all the ballots been counted. The tallies were too close because voter turnout wasn’t as high as it should have been. This brings me to the point of this rant.

The makeup and composition of the Executive and Legislative Branches of our Federal Government depends on who gets the majority vote. The makeup and composition of the Supreme Court, Justices who serve for life, is determined by who occupies the White House and Senate at the time a seat becomes available. Once confirmed to the Supreme Court, short of resignation or impeachment, the Justice is there for life. Since the Justices are becoming more and more of a political branch of government and less a judicial branch, we need to be very sure who we elect to the Congress and Presidency. 50% or less voter turn-out does not represent the majority view, wishes and needs of this country. More people need to take the time to go out and vote in all elections, especially the midterms.

Look at who we have on the Supreme Court now: Both Thomas and Scalia have close ties to conservative groups and the Koch brothers. Their rulings on cases that impact the Koch’s business dealings and political causes mirrors those of the Koch’s. There’s no difference at all. Worse yet, even when close ties with the Koch’s have been shown prior to a case that directly impacts them, neither Thomas or Scalia recused themselves from hearing or ruling on those cases, something judicial ethics demands. However, there’s nobody to stop them.

Justice Roberts who was appointed by Bush and wouldn’t be there had Gore been elected worked in the Reagan Justice Department. His job was to find ways to stop the Voting Rights Act of 1965. However in Shelby v Holder, which the Voting Rights Act was the key issue, he did not recuse himself, something judicial ethic demands.

Further, both Roberts and Alito (who was also appointed by Bush and wouldn’t be there had Gore won), were corporate attorneys with corporate leanings and interests and fought for cases that favor corporate interests in the United States, prior to being on the Court. Neither recused themselves from hearing or ruling on Citizens United that ruled that Corporations are people (only entitled to more rights than people).

On the other side of the political aisle of the Supreme Court, Justice Kagan actually has recused herself from hearing cases she worked prior to being appointed to the Court. She showed judicial ethics that ended up in rulings that hurt the progressive cause.

State GOP officials are now clear to gerrymander districts in their favor, free to impose voter ID laws that disproportionately target minorities and those who would vote Democratic. Even though they can be overturned in the Courts, because Section 4 is dead, it could take time and the elections would be held and can’t be taken back once they are over.

Time for action to fix this is now. Even with gerrymandering and voter ID laws, if we can get everyone to register, get the required ID and actually get them out to vote and challenge anyone trying to stop them, we can turn these elections towards the progressive side.

Conservatives always vote, frustratingly, progressives don’t. This has to change.

I like Nate Silver; he knows his numbers and is always right. He’s predicting the House remaining in Republican Control after 2014. This is based on historical voting trends. I would love to prove him wrong. However, this will require shooting for 100% progressive voter turnout in 2014. Otherwise, the Supreme Court could go further towards the conservative, anti people and pro business directions that Roberts, Alito, Scalia and Thomas have taken it.

Only a solid Democratic majority in House and Senate can stop it. Further, it’s not just the November election I’m talking about; it’s the primaries and caucuses too. This is where we get the most progressive of the Democrats on the ticket. We don’t need any more pro NRA types who happen to be Democratic in the Congress to stop needed gun control legislation. In a year from now, the primaries for the 2014 midterm elections will begin. Get active now because we are running out of time.

1 thought on “The Supreme Court of the United States: Why we all need to vote in 2014”