Addiction: the fact or condition of being addicted to a particular substance, thing, or activity: “he committed the theft to finance his drug addiction” · synonyms: dependency · dependence · habit · problem.

Anyone with even the most basic knowledge of psychology understands the concept of Addiction. Although it is usually ascribed to alcohol and drugs and represents an overwhelming and uncontrolled desire to a substance that is provably unhealthy for the individual or people around him or her, it has also been ascribed to pornography, sex, shopping, food, gambling and as I would serious like to point out (with a little snark to follow) is gun ownership.

Psychology Today has a more in-depth analysis regarding the overall condition of addiction than this blog post will go into. However here is their site:

From this site I would like to focus on two key points they make:

I encourage you all to read and tell me if this doesn’t explain the odd behavior of those who profess their guns over everything in life.

Gun Addicts cannot be dissuaded by validated research that shows beyond all doubt that ownership of a gun increases the likelihood of being shot and killed, research that an individual with a gun presents nearly zero impact in thwarting or stopping a mass shooting, research regarding the true history and nature of the 2nd Amendment, they seriously believe the government is out to forcibly take all their guns away, they believe that they represent the majority view of all Americans despite clear polling that show 90% of all Americans (to include gun owners and members of the NRA) support Universal Background checks, ban of Assault Weapons and limitation of high capacity magazines. They refuse to accept that reasonable gun control measures in the world have been successful in reducing gun violence, they continue to be oblivious to the fact that their addiction is harming a nation trying to reduce the likelihood of another mass shooting and reduce other acts of gun violence. Also, many move beyond a mere psychological addiction to gun to the realm of psychosis when they say and believe, without batting an eye that the mass shootings at Sandy Hook and most recently in San Bernardino were “False Flag” government ran operations to try to take you guns away.

No, gun addiction is a problem for society as a whole and the addicts truly need help. One interesting thing I’ve noticed about these addicts is their fear of their guns being registered. On one hand they say they don’t want the government to know if they have guns while they proudly participate in Open Carry. Yes, these people have problems.

Therefore I suggest as a start to address this growing problem the creation of a new support group modeled under Alcoholic Anonymous. We can call it Armed Anonymous. It can be a group of Ammosexuals meeting together in a support group to address their needs and work on abetting their addiction to guns.

Of course it would require a 12 Step program:

This is just a start, but I think it would be a good one. Share with your armed friends to help them gain realistic enlightenment. 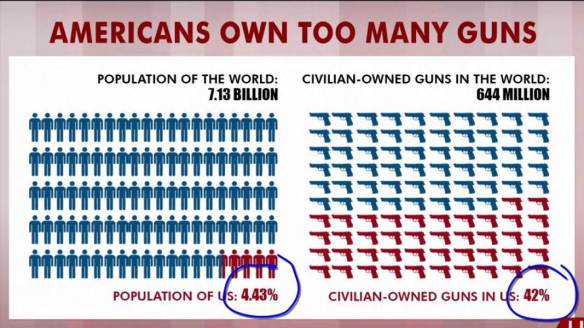