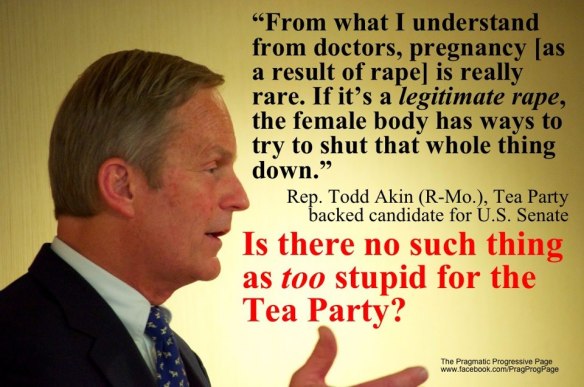 As the news broke regarding Mr. Akin’s comments about “legitimate” rape, the one thing people focused on is the fact he currently sits on the House Science Committee. Odd that a man so obviously out of touch with real science would have such a title. But people forget, this is the GOP Tea Party House. These are the people who don’t believe in science, think that climate change is a hoax and that man lived with dinosaurs ala “The Flintstones.” So it’s no wonder that he chairs this committee. In true keeping the Republican way however, it is now the Medieval Science Committee and Mr Todd’s recent comments are only the tip of the iceberg regarding his and his party’s ignorance.

His views on a women being able to prevent a pregnancy based on the trauma caused by rape are probably his most modern scientific belief. He of course is on record supporting personhood laws along with GOP cohorts Paul Ryan and Steve King (who incidentally has never heard of any pregnancy that resulted from rape or incest. He appears to be deaf to the 32,000 documented cases each year).

Todd Akin also believes that climate change science is a hoax. It has to be a hoax. Afterall, even though there is no real money in it for anyone who supports it, even though over 90% of climate scientists (including some who until recently worked for the Koch Brothers) agree it’s man-made, even though the lives of billions are negatively impacted, to address it can impact the revenue for a handful of oilmen like the Kochs. So to support climate change as man-made is a hoax because those who profit from allowing the seas to rise, droughts to run rampant, could lose a few billion a year in profit.

Todd Akin doesn’t see any problems with Fracking. I mean it’s only natural for there to be flammable water coming from well taps. And earthquakes near no known fault lines, but in vicinity of fracking operations? It’s all coincident and so what if well water becomes contaminated by chemicals nobody is allowed to know exist, there are again profits involved for people like the Kochs.

I’m sure if Todd Akin had the time, he would begin Congressional Investigations in the Medieval Science Committee on whether white men are more intelligent than any other race? (after recent events, I’m beginning to doubt that)

Is homosexuality caused by demon possession from the scion of Liberace?

Is Christine O’Donnell really a witch? Should they use new methods to find out or does the old method of seeing if she weighs the same as a duck work?

Should we go back to the moon to mine some of that good green cheese?

Did man cause the extinction of the dinosaurs by allowing them to co-mingle with unicorns and dragons?

To pay off the national debt, can we use alchemy to turn lead into gold? Or better yet, shit into Shinola?

Todd Akin is the man of the hour. However, I think he’s also a bit of a welcomed distraction in this race for the GOP. With all the coverage and the opportunity for GOP to openly distance themselves from his comments (while secretly thanking him for saying it out loud, to get the base out in support) few are paying attention to Mitt Romney right now. And another sad fact is that despite all of this, he still leads Claire McCaskill in the polls. He could still win in Missouri.

On the other hand, he could also be the RWNJ Canary in the mine to see how toxic his views are to the public to give them an idea for how to proceed in November. I think the weak condemnation from those who are clearly on record supporting his stance is evidence of that.