Who would have ever thought the day would come when someone would have to defend Dirty Harry? I mean, this is Clint Eastwood, he’s the man. Almost every character he’s ever played was a confident, strong and solid man on whom all could depend upon to do what’s right, and beat up the bad guys. Almost every movie Clint’s done I’ve enjoyed. Even as he’s gotten older, this guy knows his craft and comes up with the most endearing and cool characters imaginable. This Screen Actor’s Guild union member is good and will always be seen as a great actor, writer and director.

So what the hell happened last night? 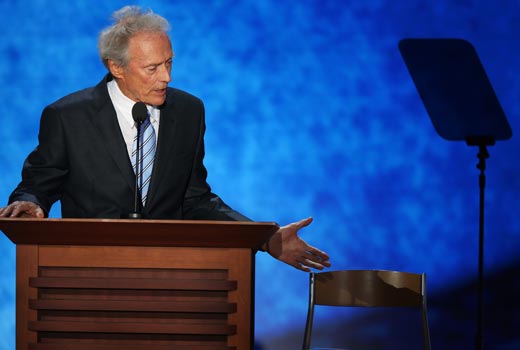 When word broke that he would be speaking at the convention I wasn’t upset. It didn’t surprise or concerned me at all. Everybody knows that Clint Eastwood is a Republican. He’s clearly right of center. However, there are also those areas, those causes that he supports that also places him center and left of center. In other words, the man is an American. His views span the ideological spectrum. However people are expected to pick a side to which to belong, and he’s selected the Conservative right, via the GOP. God bless him. He’s not afraid to say what he believes. It’s interesting that this man took flack during his Super Bowl commercial from the right earlier this year. Well, he’s still a Republican and he’s still an American and he will say what he thinks and what he believes. No matter if it’s right or wrong in the views of those who hear it. The man is a straight shooter in more ways than one.

Now Clint wouldn’t want my support, or any man’s support for that matter. He wouldn’t want pity or anything because this man has and will always be able to defend himself. However I am going to say what I believe anyway because like Clint, I will say what I think no matter how it’s received.

Some have speculated that the way he fumbled through the lines on the teleprompter and appeared somewhat out of sorts that maybe, just maybe Clint at 82 is starting that decline that many of his age will experience. Then there was the whole routine with the empty chair and the imaginary President Obama.

Well, I would like to think that maybe Clint was pulling a fast one on the idiots who run the RNC with their dog whistles and fact-less accusations against the President. I’m sure that in reality, Clint does not support President Obama. That is his right as an American. However based on his work, his interviews and his statements over the years, I don’t believe this man is a racist, isn’t an idiot and doesn’t suffer fools. Though still a member of the Republican Party, he has to contend with a lot of fools in his party.

So what was that whole schtick with the imaginary Obama? I think he was pulling a subtle jab at the speakers at the convention. The Obama that the GOP have been complaining about is clearly imaginary. That Obama doesn’t exist. They have made up an imaginary Muslim, Kenyan, Socialist, Communist, Fascist, Angry, Black vindictive charlatan with no facts to back it up. Only speculation, racism and dog whistles. Dinesh DeSouza’s fantasy fiction of 2016 sums up this imaginary boogie man the GOP has created in order to justify their racism to the world.

Clint was merely talking to the imaginary Obama that the GOP created. He knows that man is imaginary and he was telling the GOP that they are fools to keep talking about a man who doesn’t exist. By making himself look foolish, he was demonstrating how the GOP looks today.

I could very well be wrong. But I honestly don’t care. I do like Clint Eastwood. I admire his work, just not his politics. He is an icon of this country and he doesn’t need my help.

Hope you’re doing well Clint. I will be seeing your next movie, I’m sure it’s great.