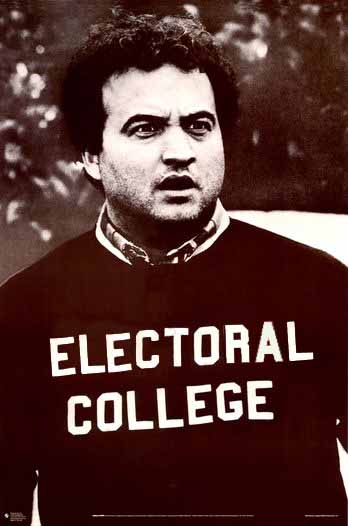 This subject invariably always comes up after a Presidential Election, and has for probably the last 200 years of our nation’s existence. This time however, the need is becoming all too apparent considering the plans afoot by those who rather win by stealth and dirty tricks than by making compelling reasons to the American people why their candidate should be president.

This country has the privilage to elect the most powerful man in the world. What is surprising is that we actually don’t elect the man (or woman) who ends up being the leader of the “free world.” We instead elect those people who decide on their own who the President will be. Another fact that may be surprising to many in our nation is that our Constitution does not guarantee the right to vote. Voting rights are whatever the individual states decide they are (though some Federal governance oversees them in certain areas) and these states have the full authority to determine how they select the electors for the Electoral College.

In the Constitutional Convention, the founders compromised to determine a method for selection of our President. It was determined that each state would have a say on who the President and Vice President would be. Under Article II, Section 1, Clause 2 of the Constitution:

“Each State shall appoint, in such Manner as the Legislature thereof may direct, a Number of Electors, equal to the whole Number of Senators and Representatives to which the State may be entitled in the Congress: but no Senator or Representative, or Person holding an Office of Trust or Profit under the United States, shall be appointed an Elector.”

So each state is allotted a certain number of electors based on how many Senators and House Members they are apportioned in Congress. The manner on how these electors are chosen is up to the State Legislators. Originally, even though a popular election was held in each state for those “allowed to vote” the electors were nonetheless still determined by the State Legislatures. In 1824, a quarter of the States had their electors determined by the State Legislatures. So even though Andrew Jackson clearly won the popular vote, he lost the election. The practice of some State Legislatures determining the actual electors continued up to the Civil War. Since then, the people vote for a slate of duly authorized electors selected in the primary/caucus system to represent the candidate for their party.

As a member of standard operating procedure, whichever candidate receives most of the popular vote in the State is allotted all the electors (at their choosing) for the college. Keep in mind that even though the candidate’s people select who the electors are, the electors are not actually bound to vote for that candidate. They can go rogue if they wish. In recent years, some states have changed the “winner take all” concept of electors. Maine and Nebraska implemented a system where the candidate gets electors based on who wins the individual congressional districts. Whoever gets the most in the popular vote gets the two “at-large” electors who represent the Senatorial representation for those states.

At the time of our founding, only white male property owners were allowed to vote. In determining Congressional representation for the House, slaves and indentured servants were counted as 3/5th of a person so as to not give the South more representation in Congress. Further, the founders believed that the act of voting required intelligence and a degree of responsibility. As a result, there isn’t really a constitutional right to vote in federal elections in our Constitution to this date. It’s implied via other amendments, but not explicitly spelled out. The individual states still have the final say in determining who can vote and how. Fortunately there are some Federal laws governing this and the Voter’s Rights Act. However, the Supreme Court is about to hear a challenge to that law on it’s Constitutionality.

As I began writing this rant, the word was that some GOP governors and State Legislatures were acting, or were considering acting on changes in their states for how the Electoral College would be determined. As with gerrymandering congressional districts, they were going to gerrymander Electoral College representation to favor the Republican candidate over the popular will of the people in their states. These acts,  under current law, are possibly legal. However, since I started, the voice of the people was strong enough that many of these attempts are being stopped dead in their tracks. However, RNC Chair Reince Priebus and Wisconsin Governor Scott Walker both want to consider this option. As long as the Electoral College continues to exist, this danger to true representative democracy will remain.

With the voter suppression laws, voter ID laws written in such a way that it’s the burden of the accused to prove their right to vote as opposed to the state to prove they can’t in conjunction with the out-dated need for the electoral college, its time in my opinion for a constitutional amendment guaranteeing an American Citizen’s right to vote in all elections in this country as well as the elimination of the electoral college. This way, presidential candidates will be required to play to the entire country, not just a few “swing states” and various districts. The “southern strategy” will become moot. Candidates will need to play to the desires of the entire population, not just a select few.

I’m starting a petition drive to President Obama’s We the People site asking that the White House begin to educate and push for such a constitutional amendment. If you agree, please visit the site and sign. If we can get 100,000 signatures by February 28, 2013, the White House will at the very least respond. This would be very difficult to accomplish. However all we are asking for is the right for all citizens to be allowed to vote their will unobstructed by others and that whoever the majority of the people want to represent us as President becomes president unfiltered by an unnecessary and outdated Electoral College system.

Thanks for your support in this effort.