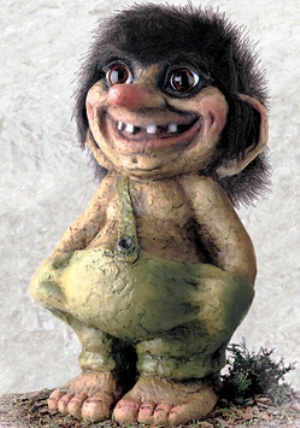 I’ve only recently started blogging in order to be able to explain more fully certain points of view I may have that 140 characters just isn’t enough for. That being said, I still prefer Twitter for quick responses, often with tongue planted firmly in cheek, or to send out links to good articles regarding the issues of the day. The one issue of Twitter that remains, and that depending on your level of tolerance, good humor or sense of humor can be a problem is dealing with Trolls.

Trolls are those who love to insert themselves into your time-line to cause trouble, annoy and disturb what you’re trying to say, and oddly are not open to any intellectual discussion or compromise. Some have speculated that they are like the RWNJs who call in on Left Wing Radio Call-In shows to spout off Frank Luntz Talking points. They are easily spotted in Twitterland.

Ordinarily they have either no true Avatar, or a very colorful, American Flag on full display with pieces of artwork with all the Patriotic Trappings you would expect if you did acid on the 4th of July. Then there is the Bio. Again, either non existent, or something “glorious” with the key catch phrases “Conservative Christian” “2nd Amendment” “Tea Party Patriot” “NoBama” “Father” “Veteran”, etc, usually citing some oxymoron. Finally, they usually have very few followers, less than a few hundred at best.

You can be involved in your own Time Line when they will sneak in with something insulting (or what they deem as insulting) to you. They’ll call you a liberal, socialist, communist, Maoist, fascist or some combination of the above, or even all of the above. Did I forget to mention these people aren’t all that bright? They want to engage you and hopefully irritate you so much, you end up blocking them. Then they cheer that they were so obnoxious, stupid and clearly so out of touch with reality, you blocked them. I wonder if they don’t get paid by the Koch’s for the number of times they are blocked.

So how to deal with these people? Well, the simple course of action is to simply ignore them. Keep in mind, they enter your Time-Line and you respond, they now are known to your followers and get a wider audience. I believe that is part of what they want. It’s obvious that they are not interested in trying to engage you to try to sway you to a new way of thinking. Insults and lack of anything remotely considered a fact does little to accomplish that goal. Oh, did I mention that there are some Trolls out there who do truly believe in their rhetoric and still throw out the same crap mentioned earlier. These are the mentally insane folks. These are the guys who wait for the Public Library Computer to free up so they take off the tin foil caps and rant their rants.

Now if you want to have some fun, you can engage these folks. I’ve been known to do this from time to time. Unfortunately, as a former supervisor of mine once told me, “He doesn’t suffer fools” and I usually just say the hell with it and hit the block. You can do that, no harm, no foul, but you give them a victory. There have been times when I will re-tweet their stuff to my followers in much the same way Andrew Breitbart and his folks would do. I was part of many such exchanges before he died and actually had some fun because even though they entered my Time Line, by bringing me in, I was able to annoy the hell out of a lot of these folks resulting in me being blocked. Often I will see some of my Twitter family being attacked by these trolls and I will move in to take some of the heat off of them. I’m familiar with their line of reasoning, their lines of attacks and have become adept in turning it around on them.

One thing they cannot stand is for when they call you an Obama Supporter and/or Liberal Socialist, say proudly that you are, and why aren’t you. Get them to try to justify their positions. It’s usually lame reasoning that you can retweet to others and you end up being blocked.

However, if you just want to tweet among like-minded friends, enjoy time telling jokes about the other side, making your observations, sharing your knowledge and suddenly a troll inserts him or herself into your time-line, just ignore them. Don’t respond at all. They usually move on to others who do enjoy playing with their food.