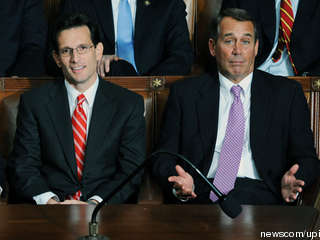 For the 33rd time on July 12th, 2012, but for the first time after the Supreme Court decision that the Affordable Care Act was Constitutional, House Speaker Boehner and Majority Leader Cantor placed before the House a bill to completely repeal the Act. They offered nothing to replace it with, just a bill to repeal it completely. Forget that this vote actually cost the American Tax Payer $48 million dollars, for something that would never be heard in the Senate. And even if it was and somehow passed, would never be signed by the President.  There was something else about this bill that has gotten little attention in the mainstream media.

Prior to this vote that would in effect: eliminate healthcare for 30 million Americans, allow insurance companies to deny coverage for pre-existing conditions again, rescind coverage for getting sick again, remove children under 26 from coverage again, allow more than 20% of premiums collected to go for things outside of healthcare again, make it legal to overcharge women for coverage again, etc etc etc, there was a rider that was voted on for the bill that was presented by the Democrats. It was a rider that was voted down completely along party lines. It was a rider that would remove Members of Congress from getting tax payer paid-for healthcare. It would have denied Members of Congress the same thing they were trying to deny 30 million Americans for.

Seems only fair. The argument from the Tea Party Controlled House of Representatives is that tax payers shouldn’t be held to pay for the healthcare of others. It should be the individual’s responsibility. Government paid healthcare is after all “Socialism”. It’s bad, evil, must be eliminated, unless you are a Member of Congress.

Once elected to the House of Representatives or Senate, you have access to the best healthcare plan the tax-payers can provide. What’s more, it’s inexpensive to the user and the user’s family, and it’s there for them for life.

The thinking on the Right regarding “socialized” medicine is mind-blowing. Even though Republican President Theodore Roosevelt first proposed universal healthcare over 100 years ago, it took a Democratic President to finally pass it under the provisions pushed by the conservative members of the GOP and Heritage Foundation (though it would now appear that they never supported these ideas “retroactively” to cite Ed Gillespie).

During the Medicare Debate, the GOP harped on how this was Socialized Medicine and cannot be allowed to pass. But it did pass, and during the Tea Party shouting matches at ACA town hall meetings, many carried the sign “Keep Government Hands off my Medicare.” It is but to laugh.

A country and a people are only as strong as their weakest links. If you want to call it “Socialized medicine”, go ahead. I don’t really care. The rest of the industrialized world realize that government supported healthcare for all keeps their people healthier and medical care less expensive. If you deny coverage the way the GOP say you must, healthcare is far more expensive, available to far too few people and the entire nation suffers, except for those in Congress who have healthcare for life at our expense.

Now about the Jobs Mr. Speaker…..