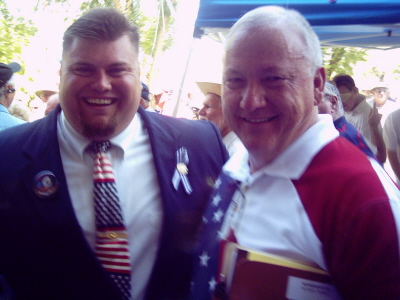 Above for those of you who don’t know, this is a picture of JT Ready on the left with Former Arizona Senate President Russell Pearce. In my humble opinion, this represents the problem with NRA “liberal” gun access position. JT Ready was a self avowed Neo-Nazi in Arizona. a war veteran with some severe mental health issues that were becoming more and more apparent leading up to him murdering his girlfriend, her daughter, her 15-month old granddaughter, the daughter’s fiancée, and himself. He had been Court Martialed twice by the Marines and received a bad conduct discharge from the Corps. He was also running for Sheriff in Pinal County. In the home, police found weaponry to include 6 live hand grenades. All weapons recovered were lawfully purchased.

Now for Russell Pearce. He’s the father of SB1070 that he wrote on behalf of the American Legislative Exchange Council at behest of the Private Prison Industry to round-up and lock up people suspected of being here illegally. You know, brown folks who Russell has always had a problem with. Due to his racist views and disgrace he brought to Arizona, his district, a very conservative one at that, recalled him. Today, Russell posted on his Facebook how he blames gun purchase enforcement laws (that really don’t exist anymore) and the victims in Aurora for not fighting back at a man dressed in Kevlar blasting away with an automatic assault rifle (legally purchased) after igniting tear gas canisters in an enclosed theatre.

This picture is emblematic of the goals of the NRA.